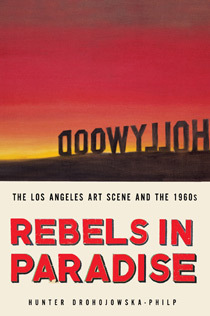 "Brilliantly illuminated .... Drohojowska-Philp skillfully interlinks the art movement with news events and cultural milestones in film, fashion, novels, theater, and music, from Frank Gehry’s architecture to the Watts riots. Having interviewed many of the participants, she introduces David Hockney and others with in-depth profiles and colorful anecdotes. Recreating an electric era when the art world made an axis shift, Drohojowska-Philp successfully paints a Day-Glo image of those days when anything seemed possible."

ARTNEWS, FEBRUARY 2005
BEYOND THE O'KEEFFE MYTH by Sylvia Hochfield:
"Her myth protected her from intrusion by letting people think they understood her better than they did. Full Bloom, ten years in the making and incorporating much new information, is corrective. It goes behind the self-image O'Keeffe so carefully constructed and reveals a complex, stubborn, driven, shrewd, and not entirely lovable individual....Drohojowska-Philp tells O'Keeffe's story with insight and sensitivity...With this biography...we know a great deal more about the artist. . . and we have a much clearer picture of her place in American art."

LONDON SUNDAY TIMES
REVIEW BY FRANCES SPALDING: "This new biography of O'Keeffe cuts the pack afresh. It turns up cards that O'Keeffe would have ignored or concealed. The story of her life becomes messier, yet, for that very reason, more impressive and more intriguing."

Deserted
Review by Sarah Douglas
"...O'Keeffe is a tough subject, intent as she was, later in her life, on creating her own image, her own myth.... Full Bloom does indeed present her in full."

Georgia On Our Minds
By Peter Plagens
Long after her death, O'Keeffe's still a definitively American artist. But take the myth with a grain of salt.

MS. MAGAZINE
"Hunter Drohojowska-Philp's book tells with scholarly aplomb the tale of a fiercely independent artist who stuck by her gifts through thick and thin."

LOS ANGELES TIMES
"This book is likely to remain the definitive life of O'Keeffe for as long as the public continues to be fascinated by her story."
-Hilton Kramer, Los Angeles Times

THE NEW YORKER
"Drohojowska-Philp's biography painstakingly assembles the details of O'Keeffe's life--love letters, financial problems, a schoolteacher who said that her drawing of a child's hand was too small..."
The New Yorker

NEW YORK TIMES
"As Hunter Drohojowska-Philp makes clear in her biography, O'Keeffe was exceedingly sensitive to her shifting critical fortunes. Somewhere, deep down, she may have even understood that the size of her legend had little to do with the quality of her painting."
-Jed Perl, New York Times

Full Bloom: The Art and Life of Georgia O'Keeffe
By Hunter Drohojowska-Philp

"I found Full Bloom absolutely fascinating. The book is essential reading for anyone who wants to understand the mind and heart of a revolutionary artist."

-Erica Jong, author of Fear of Flying
"Drohojowska-Philp's brimming biography of Georgia O'Keeffe is fresh and clear, supple and layered, offering much that is new but, most welcome of all, a tone that is wise and large-hearted. By the end of her increasingly engrossing narrative, we feel we truly have been given, finally, the woman on paper."
-Lawrence Weschler, author of Vermeer in Bosnia and Mr. Wilson's Cabinet of Wonder
"An extensively researched biography of arguably the most identifiable American painter of the 20th century. [Drohojowska-Philp's] use of previously untapped sources confirms a wealth of information previously a matter of debate or obscured by O'Keeffe herself."
-Kirkus

Georgia O'Keeffe was one of the most successful artists of the 20th century. Her enormous, intimately rendered paintings of flowers, stark Southwestern landscapes and hauntingly beautiful found objects are unmistakable. O'Keeffe posters announce themselves from the walls of thousands of college dormitories, and hers has become a household name, synonymous with feminism. Yet despite her near mythic status, Georgia O'Keeffe has remained, in ways, undiscovered. In FULL BLOOM: The Art and Life of Georgia O'Keeffe [W.W. Norton & Company; September 7, 2004; $35.00 cloth], Hunter Drohojowska-Philp carefully reveals the artist whose legendary reputation and carefully self-made image served well to obscure her personal privations from view.

From her humble beginnings in Sun Prairie to her unprecedented sensation as a modern artist, Georgia O'Keeffe seemed the ultimate success parable. Her art was distinctly, boldly feminine; she painted largely in pastel tones, but unlike the more whimsical, polite female painters that preceded her, O'Keeffe's art was undeniably confrontational. Influenced by the photographers Paul Strand and Alfred Stieglitz--O'Keeffe applied the cropping and framing techniques afforded by the camera lens to fine art. Despite the audacious quality of her art and the popular image that she projected--a stern, sun drenched, black-clad woman looking askance as she is photographed in her desert studio--O'Keeffe, as Drohojowska-Philp deftly illustrates, was a woman whose life was defined by restrictions: financially (as a young woman), physically (she suffered the effects of ill health throughout her life), and perhaps most acutely, in love. In her carefully wrought and finely woven biography, Hunter Drohojowska-Philp offers an intimate portrait of the artist--carefully tracing O'Keeffe's defining relationships, her artistic philosophy, and her crucial move from Manhattan to Abiquiu, New Mexico.

After her introduction to the successful gallery owner and photographer, Alfred Stieglitz, O'Keeffe was propelled headlong into New York City's art world. The attraction between the young artist and the older photographer was immediate--and Stieglitz left his wife of nearly three decades to marry the much younger O’Keeffe. But as his wife's artistic career began to eclipse his own, Stieglitz turned his attentions to a new muse, Dorothy Norman.

Few of us know of Dorothy Norman, but her long-term affair with Alfred Stieglitz was largely responsible for O'Keeffe's move to New Mexico, where she completed many of her trademark paintings and lived out her artistic vision with gusto. Drohojowska-Philp is one of few biographers to have interviewed Norman, and her carefully probing questions give voice to the woman O'Keeffe virtually erased from the record. At last, in part through Norman's testimony, we are able to see O'Keeffe, not as a legendary artist, but as a woman that both suffered the humiliations of love deeply, and a woman whose fierce motivation barred her from wallowing in self pity.

Extensively researched--Drohojowska-Philp has read the entirety of the Alfred Stieglitz/Dorothy Norman correspondence, and she has interviewed dozens of the people closest to O'Keeffe in her lifetime--FULL BLOOM offers a fine balance between the artist's life and work. With her critic's eye and careful attention to O'Keeffe's artistic development, Hunter Drohojowska-Philp incisively contextualizes the paintings, so that O'Keeffe's personal triumphs and losses, her need to visually explore and define her surroundings, and her emblematic themes are carefully delineated. FULL BLOOM lends entrance into the artist's world--we come away from this fascinating book well informed about O'Keeffe's seminal contributions to modern art, and with greater understanding of a visionary American artist.

About the author: Hunter Drohojowska-Philp is a West Coast contributor to ARTnews and Artnet and a regular contributor to the Los Angeles Times. An art critic and journalist since 1980, Drohojowska-Philp also writes about design for Architectural Digest, Metropolitan Home, and Western Interiors and Design. She was chair of liberal arts and sciences at Otis College of Art and Design for nine years. She lives in Los Angeles with her husband.